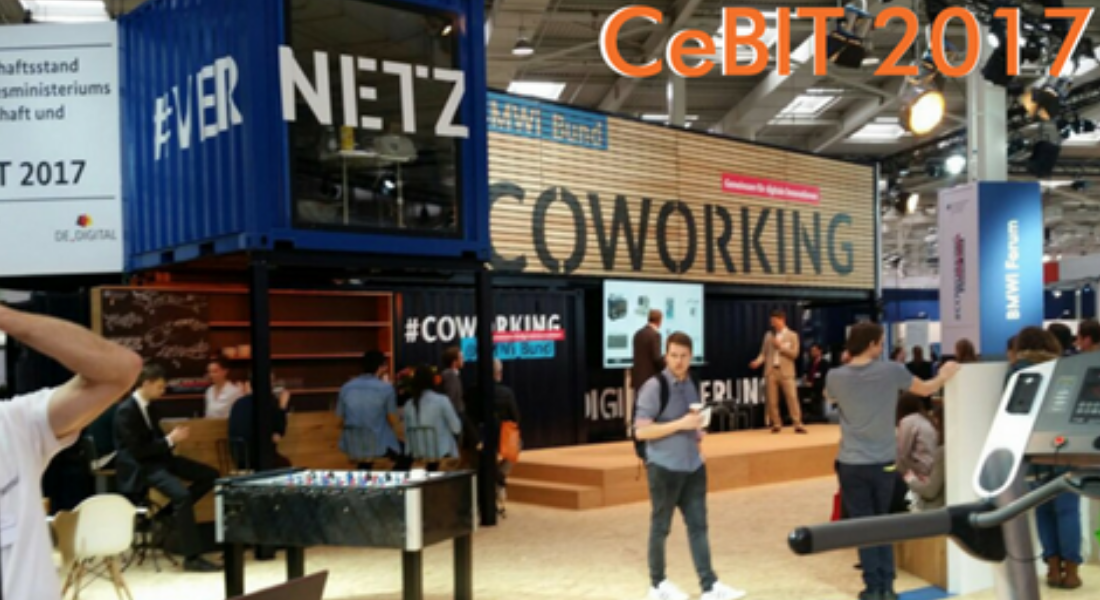 CeBIT 2017 occupies much of the vast sprawl that is the Hannover trade show grounds this week – and Fourth Day’s Germany director Danny spent a day nosing around.

This year’s partner country was Japan, evident from the moment you headed into the hall nearest the main entrance. It was not just that 90% of the people in the hall were of Asian origin, it was the scale and detail of the exhibits.

Whole cities and their traffic/transport schemes lit up vast LED screen banks, while drones and lasers mingled overhead and robots trundled merrily down the aisles for visitors’ entertainment. German trade shows can be staid and reserved affairs, but in the guest hall, the guests had brought the party to Hannover!

Elsewhere, the show had pepped up from last year. The start-up hall was bigger, featured an intriguing ‘Founders Fight Club’ concept in which start-ups were asked to pitch against each other in a cage.

Cage fight: Start-ups battle it out in the Founders Fight Club

Apps and programs all over promised revolutions, ranging from little telematics companies such as Parkd – whose program would protect you from parking fines for the rest of your lives, to algorithmic app Daily Dress that could help women decide what to wear on any given day, to offerings of perhaps more global gravity.

One such larger and potentially more significant offering was Holoplot, whose speaker consoles beam sound more accurately in difficult acoustic places such as stations, so as to deliver the message more effectively. Put simply, it could be a PA system for train stations that you could actually understand. Let that sink in…

Ding dong: The next tech arriving at CeBIT will be Holoplot

Elsewhere, I was able to land eight ten-foot putts out of ten with the help of puttview, a laser-equipped console and set of VR glasses that not only showed you the line of your putt, but also showed you, on command, how far to bring the clubhead back and how fast to hit the ball.

Then there was Swiss company Deltalis, which has taken an old cold war survival chamber deep in the bowels of a Swiss mountain and converted it into a carbon-neutral and unfathomably vast data storage centre, safe from the threats of terrorist attack, war and climate change catastrophes. In an age of data security questions, that could be a significant place in years to come.

At last year’s CeBIT, Germany’s government laid out its ‘Digital Strategy 2025’, an ambitious set of plans intended to digitise all corners of Germany’s industrial production within ten years. Going on the sights and sounds of CeBIT 2017, everything is proceeding as planned.