Will the press release perish? 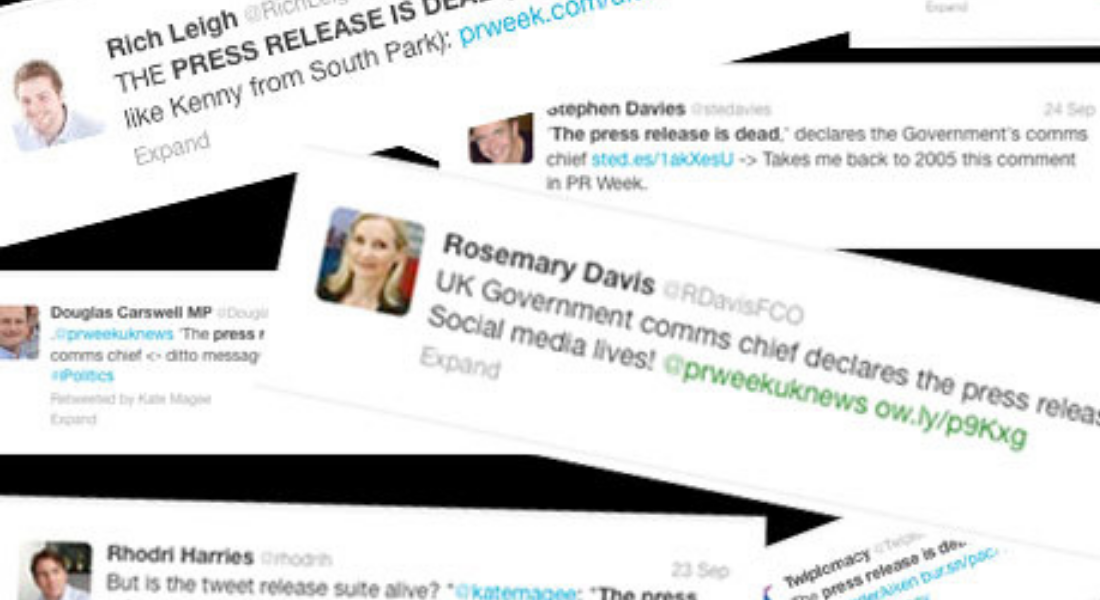 There has been much discussion recently about whether the government should turn to twitter to break news to the public rather than via a traditional press release sent to favourite media contacts. The argument Anthony Simon, head of digital communications at No 10 and the Cabinet Office, puts forward, referenced here by The Drum is that the government needs to keep up with technology and needs to respond to the way society now likes to digest its news – quickly and directly from the source.

In response to the counter-argument against his proposals (largely suggesting that of-the-moment news is heavily laden with risk) Simon said: “Yes, there are risks around it but what are the risks if we’re not doing it? If in 10 years’ time we’re still sending press releases out then where will we be?”

This got me thinking about what place there is for the press release in today’s world of newsfeeds and whether this might change in the future – why, I thought, should we continue to use them?

There’s no doubt that the way we read and share news has changed and is continuing to do so. We want news live, we want to share it, comment on it – overall society has been given a platform to communicate with itself better, which is a great thing. That said, I’ve put together a little list below of why I think the humble press release may still have a bit of life in it yet (and why I suspect No 10 may still be using them in 10 years after all!)

Less risky
As noted, press releases are inherently less risky, but this is also because they are less open to comment and opposition so publicly. Perhaps an organisation wants to avoid negative discussion around its latest decision, but appreciates that people will need to know about it so can choose to do this through a press release.

More detailed
Particularly when it comes to sensitive or complicated news, which might need a bit of explaining, this can be accomplished much more easily in a press release than in the constraints of social media.

Considered
That’s not to say that a tweet wouldn’t be carefully thought out, but there is certainly less chance of a slip up. What might seem like a great thought one moment might suddenly turn into a mistake the next, by which point it would be too late. Press releases are generally checked over by various pairs of eyes before they enter the public sphere – and the time delay, which Simon suggests is a bad thing, could in fact save the day on some occasions.