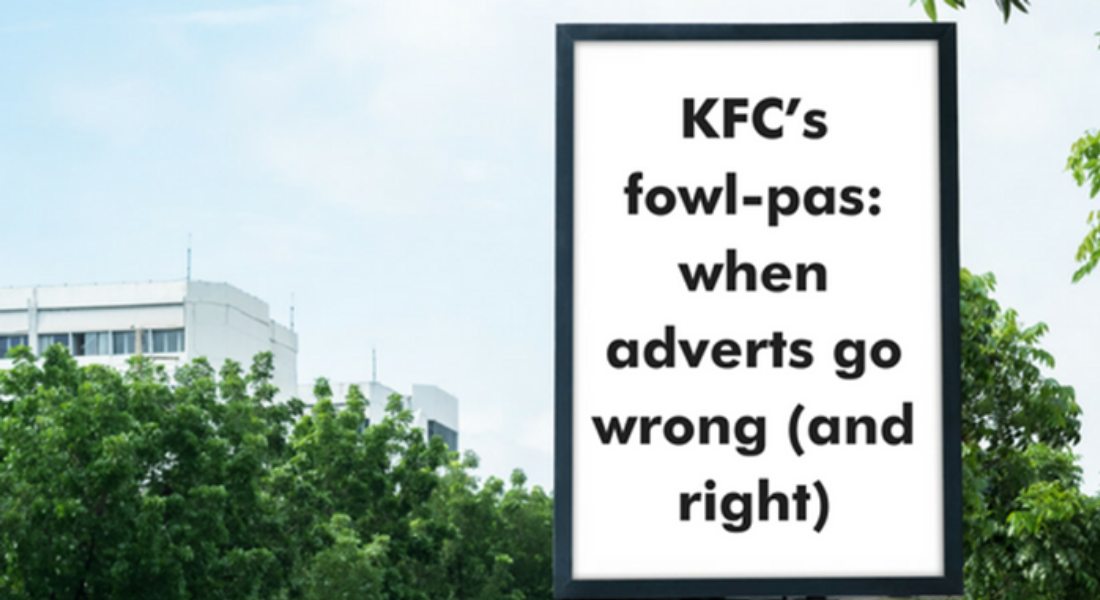 The recent furore surrounding the KFC advert – The Whole Chicken – sparked some serious conversation in the London office. Featuring a chicken dancing to X gon’ give it to ya by DMX, many members of the public raised objections due to its ‘distressing’ nature. Those against it argued it could offend vegetarians and mislead potential customers about what exactly is in KFC’s chicken dishes.

What really got us talking though was how this particular ad seemed to miss the mark for its audience. Knowing your audience is one of the most important aspects of advertising, marketing and, of course, PR. You must know who you’re aiming to speak to, what’s important to them and what’s going to make them buy your product. In light of this, I’ve looked at a few ads that I think have failed and succeeded in recent months.

The bad – KFC and the new Whole Chicken:

In the case of the ‘whole chicken’, many have highlighted the similarity between KFC’s sashaying hen and PETA’s ‘I’m me, not meat’ adverts. With carnivores as their target audience, KFC’s advert has admittedly missed the mark a little, as many meat eaters won’t want the reminder of the origins of their dinner. Though we cannot be sure that the 500 complaints to the Advertising Standards Authority came from KFC regulars, it shows a lack of awareness of how people view the brand, as it was pointed out that the KFC trademark isn’t particularly aligned with animal welfare, or healthy, organic produce.

Cadbury has gained a reputation for creating some pretty wacky adverts (think crazy eyebrow kids) and the confectionery giant’s recent #freethejoy campaign was no different. Leading with the feel-good ‘yes sir, I can boogie’, the dancing office employees brought out the inner-child in everyone. For an organisation now associated with fun and light-heartedness, the #freethejoy campaign was well-tailored to the audience; a Cadbury chocolate bar is a lovely treat, so the advert fits with how the consumer feels when buying the product. Another clear advertising win for the chocolate connoisseur.

Dove’s previously well-received #realbeauty campaign took a controversial turn recently, after it attempted to launch a range of bottles in different shapes to signify that women come in all shapes and sizes. This led to criticism as women took to Twitter to complain, with one journalist stating that allowing customers to ‘choose’ a bottle that mirrors their body type is patronising, not empowering. Ouch.

The great – Great British Bake Off:

After the high-profile drama that surrounded the programme last year when it decided to leave the BBC, Channel 4 has won back the hearts of Brits everywhere with its family friendly, cake-themed advert. This lovely ad, containing cartoon cakes singing ‘we all stand together’, also harks back to the old series by including the famous lion bread made by an old contestant. Viewers are clearly attached to the BBC-backed show, but the dancing baked goods helps us put the loss of Mary Berry to the back of our minds and anticipate the brand-new, fast approaching series.

Possibly the most controversial advert of 2017 so far, the brand’s attempt at projecting a “global message of unity, peace and understanding” faced a huge backlash from consumers. Many believed it trivialised social justice demonstrations and was disrespectful towards the Black Lives Matter movement. The conglomerate pulled the advert pretty swiftly and apologised for any offence caused; however, a poll conducted after the advert showed that 44 per cent of respondents had a more favourable view of the company after the furore, indicating the importance of being in tune with any reaction consumers may have – and responding accordingly.

Last and by no means least, John Lewis’s annual Christmas tale has become the pinnacle of advertising in Britain. The introduction of these adverts mean that the company is now associated with the merriest season and has led to other organisations trying to compete with them every year. The 2016 masterpiece, featuring Buster the Boxer, was no different. These adverts hit the nail on the head every time, resonating with families across Britain every festive season. Bring on Chrimbo.

Have I left off any of your favourite adverts? Or any that make you cringe? Send me an email at eryl.bradley@fourthday.co.uk  or tweet me @eryl_bradley – I’d love to hear your thoughts.