Get your PR approach right for the German business market 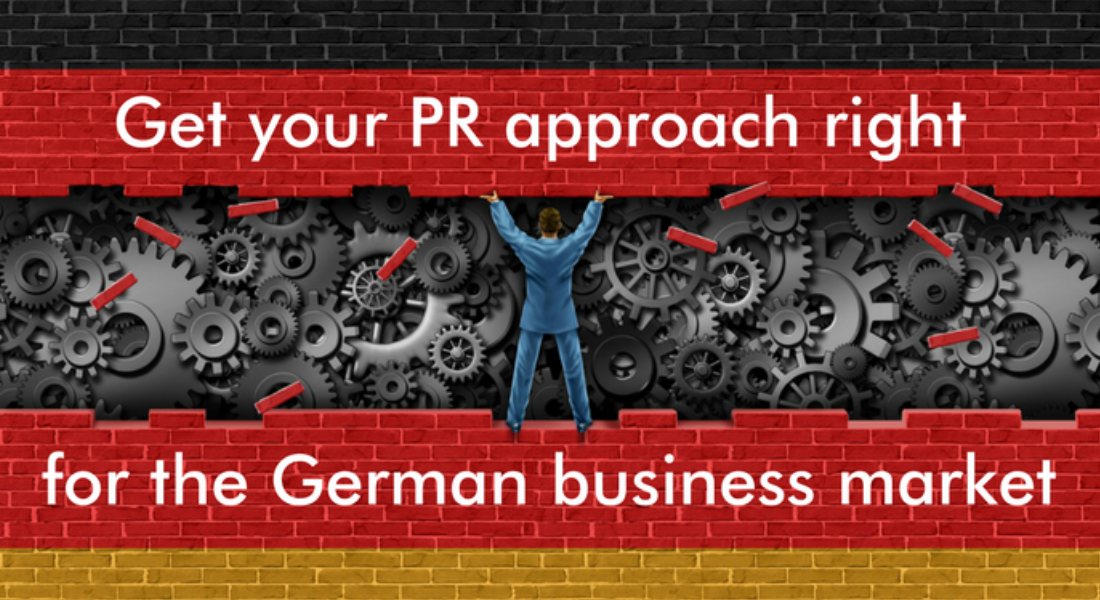 Successfully expanding into any new territory requires a good understanding of the culture of the country you’re entering. This is certainly true with Germany.

Knowledge of how the media works, and how networking is carried out, can make a big difference when trying to build your reputation in Europe’s largest economy.

To shine a light on how Germany contrasts with the UK, we had a chat with the managing director of our German office, Danny Stephens.

How different is the media in Germany, compared to the UK, and how does that affect the role a PR professional plays in regards to media relations?

Danny: “You don’t see the number of sensational stories in the media that are fairly typical on any given day in the UK. The German media is more serious in general and they put a lot of emphasis on being factual. This has a big impact on how media relations are carried out.

“For instance, press releases usually contain a lot more information and detail. Journalists would rather get the complete story already written. As a PR professional, therefore, you need to be really well informed if you are going to get a story out there. Any ill-conceived, brazen attempt to influence the press will also be frowned upon and do you no favours.

“In general, the industry is much more formal but this doesn’t mean journalists are not happy to speak to you. PRs are seen as distinguished professionals, the person responsible is viewed as the external identity of a company.”

Content production has become a huge part of PR in the UK, is this also the case in Germany?

Danny: “Yes, that’s true. The industrial and media landscapes are divided up into small niches and there are a lot of publications to support this – more than in the UK. These publications often want content that is very specific. It’s time consuming but you’ll gain coverage if you identify the publications you want to work with and provide the content they are looking for.”

How big a role does social media play from a business perspective?

Danny: “People view social media very differently in Germany. This is because they are incredibly conscious and wary of their personal data being online. This is particularly evident on Facebook, where it’s rare to see people put their real name on their Facebook profile. It’s also noticeable that email marketing is not common here due to Germans being more sensitive to data privacy.

“That said, there’s a fairly big social media presence. I personally spend a lot of time on LinkedIn. There’s also a German version of LinkedIn, Xing – although its more expensive and people tend to focus on it less.

“People also use Facebook but never for work, they tend to keep this for personal use. Compared to the UK, there is certainly more of a professional/personal divide, especially with online profiles. People keep their own time very separate from their work lives.

“When it comes to Twitter, it’s not a necessity for most businesses – and it’s even less common to use it as an individual.”

Given that PR plays a key role in any SEO campaign, is it common for clients to ask you to consider search engine visibility within PR activity?

Danny: “SEO is a huge focus for companies but whether they see this as a task for their PR is questionable. This is usually seen as a separate discipline and looked after by a specialist. That said, many businesses are interested in how PR is impacting their search engine rankings.”

How big a role does networking play in a PR professional’s activities in Germany?

Danny: “Trade shows are big for networking. Germany is Europe’s leading country for trade shows – some cities even have their own management body to fund them. And the events can be a really big deal! I attended a particularly impressive one for startups held in Munich around the time of Oktoberfest, which had Kevin Spacey and Richard Branson as guest speakers.

“People work very hard to get to as many of these trade shows as possible, myself included. They are a great place to meet new people and get a company name out there.”