Masculinity in the Workplace - He for me? He and she? Or are we all just people? 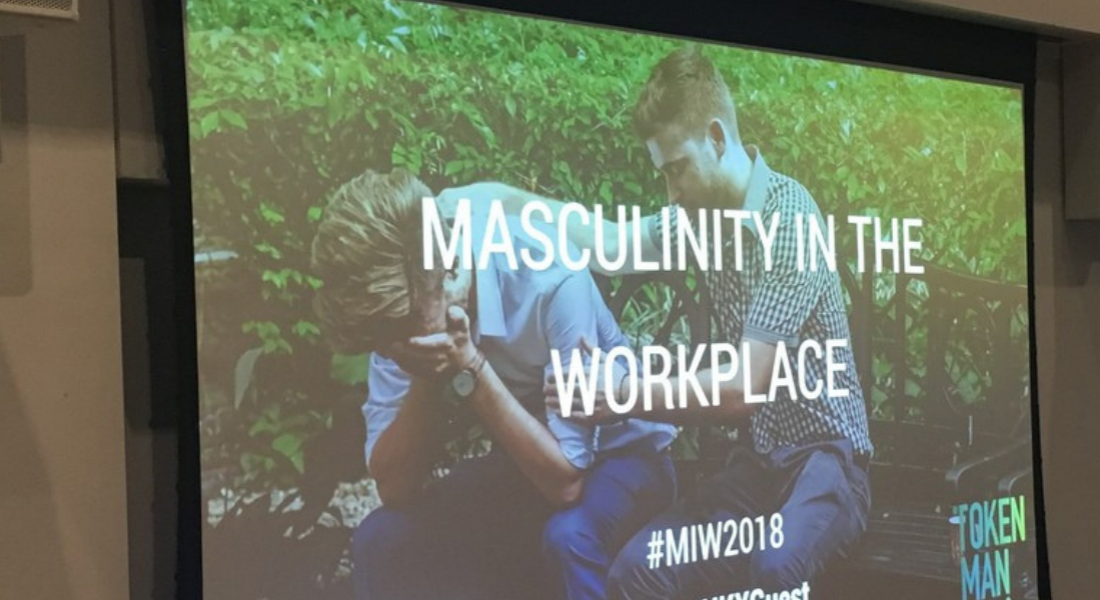 Y esterday marked International Men’s Day so it was apt that my colleague Xanthe and I headed to Masculinity in the Workplace, hosted by Token Man; an initiative that aims to give men in industry a better understanding of the challenges women face in business, and HeANDShe; a conference series designed to bring men into the gender conversation.

As someone who dabbles in hosting events, I’m always impressed when someone manages to get great sponsors (asking people for stuff is hard). But despite the big brands on the screen, getting people on board wasn’t easy, as Daniele Fiandaca, co-founder of Token Man explained: ‘‘We spoke to several male CEOs about this event who said they couldn’t be seen to be supporting men.’’

This is not the first time I’ve seen this sort of hesitation. And, honestly, I think it stems from a fear of being seen to support one side over another (you’re supporting men, so you’re not supporting women) or of saying the wrong thing only to get shut down. I have male friends who won’t attend or participate in events about gender for this very reason.

So, it was encouraging to see a healthy mix of men and women in the audience last night. But I think we could still all do better if everyone felt they had the support to contribute openly and honestly.

The first speaker of the night, Jordan Stephens (Rizzle Kicks!) ticked that box, speaking about how a break-up caused him to look at his own cycle of behaviour, how he could hold himself accountable, how he used to call himself a feminist but admitted that, maybe, his behaviour didn’t marry up. ‘‘There’s a fear that holding yourself accountable means you’re the worst person in the world.’’

This issue of language and labelling was brought into focus by Laura Radcliffe who lectures in organisational behaviour at the University of Liverpool. Crucially, Laura spoke about the importance of distinguishing between sex and gender and the need to separate the terms “masculinity” and “femininity” from “men” and “women” – and just start talking about humanity instead. As Laura put it, ‘‘when I’m talking about Masculinity, I’m not talking about men.’’

Then there’s language that is so ingrained in our culture. As Jordan pointed out, the word pussy is still used derogatively, as an indication of weakness, and whether we mean it maliciously or not, it can be all too easy to find ourselves getting into bad habits. I had to stop myself from saying ‘man up’ to a friend the other day. It may seem like a small thing but, by using that phrase, I’m contributing to the idea that men should be strong, silent superheroes while sensitivity (often characterised by women) is a weakness.

The issue of men being strong, silent types goes much deeper. As the event progressed, the panel joked about men of a certain age only being friends with their wife’s friends. A few chuckles in the audience, but this is real. As panellist Bruce Daisley pointed out, the idea of a man asking another man (maybe someone they don’t know that well) out for a drink is terrifying.

The fact is, women are better at talking. Which is why I think it’s so important to open the door to men when we’re having this discussion.

So how do some of those stereotypes filter down to the workplace? Laura had plenty of horror stories about people she’d worked with who were subject to snide comments masked as ‘banter.’ Scenarios where male employees were lying about going to one last meeting at the end of the day when they were going home to carry out parental duties. If someone left at a reasonable hour to have dinner with their family, they might be subjected to ‘well, we know who wears the trousers in your house’ type comments. While things do feel like they’re getting better in the workplace, the ‘ideal’ worker is still seen as someone who puts work first – and men are often penalised for straying from that norm.

The idea of inherent stereotypes can be tough to budge. As we moved along the panel, Havas London CEO Xavier Rees said they had a client in the other week who dismissed an advert because of what it portrayed. The client had said: ‘but, boys don’t cry.’ (For extra reading, comedian Russell Kane does a great podcast called Boys Don’t Cry which is well worth a listen).

It would be impossible to tackle such a giant topic in a single evening, but Masculinity in the Workplace gave it a good shot and keeping the conversation going is certainly helping. But it’s important to remember that that’s exactly what it should be – a discussion. Panellist Catherine Mayer, co-founder of the Women’s Equality Party said that every year, on International Men’s Day she gets invited by the BBC to come in and debate someone like Piers Morgan. But the fact that it’s always framed as a punch-up is why she says no. And I couldn’t agree more. It doesn’t have to be an ‘us versus them’ scenario, but just people, trying to help each other out.

As Jordan summarised, there’s a whole lot of stuff going on out there. But, if you can look at yourself first followed by who you surround yourself with and how you can help your community, then hopefully it’ll filter all the way up to the top.