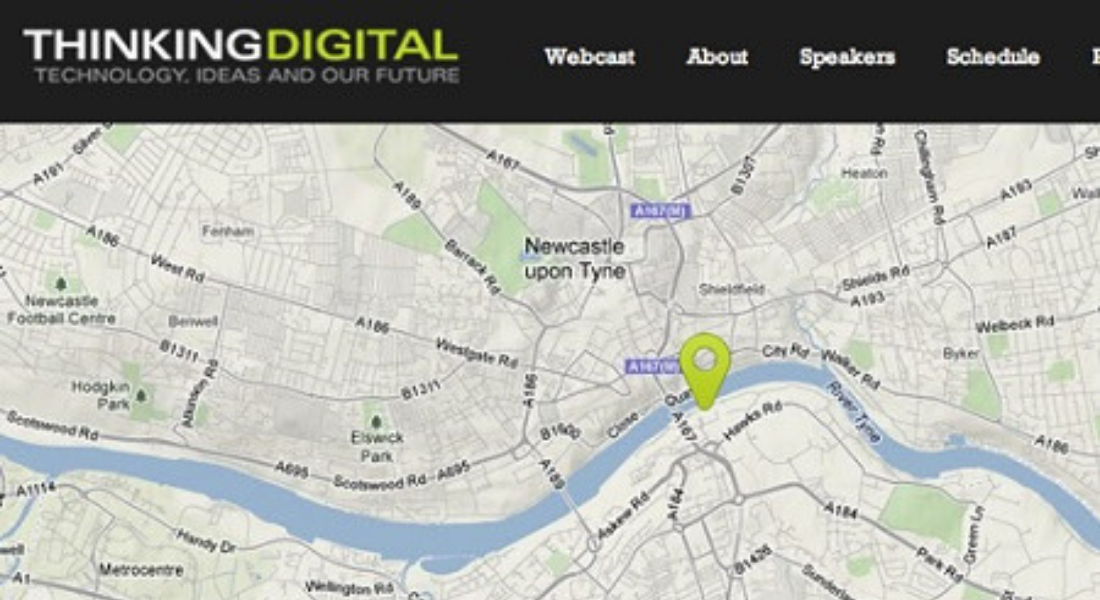 A blind man eating a taco drives his car down the road – It may sound like the beginning of a bad joke but this was just one of the realities of modern life that was explored on day two of the Thinking Digital Conference in Newcastle. Describing itself as ‘exceptional talent from the worlds of technology, science, business, media and the arts,’ (quite a lot to promise from a two day event) I wasn’t sure what to expect. Tuning in through a live web stream at the artsy Cornerhouse in Manchester, (a very handy one minute walk from my flat) I loaded up on coffee, opened up my laptop and prepared myself for some serious digital insight.

Without over doing it, the next few hours really were beyond my expectations. To expect to fit all the speakers and the various themes and ideas into one blog post would be impossible. But I’ll give it a go.

The first speaker was Alexander Bell from Google Business Photos. As a relatively new, paid-for service that hasn’t been tapped into much, Business Photos does what it says on the tin. Companies are able to hire a certified Google trained photographer to take snaps of the exterior and interior of an office building – a great way to ensure that the company remains up to date, particularly if it’s moved offices or has new signage. But it isn’t just for office blocks. In the next week or so, you’ll be able to take a trip down Harry Potter’s ‘Diagon Alley’ in the Warner Brothers studios – a very exciting prospect for any 11 year old to explore. And for the adults, you can now saunter down the corridors of the Whitehouse – it’s this that really puts the magnitude of its possibilities into perspective.

Following on from Alex’s talk was Ed Parsons from Google maps. With a background in traditional maps, Ed rightly pointed out that nobody can read a map anymore (I barely know where Manchester is). And yet maps are used more today than ever thanks to our trusty mobile devices. As with the Business Photos concept, they are now also present in interior locations – perfect when attempting to navigate your way out of a six-floor shopping centre.

What I was most pleasantly surprised at (and what I hope I have conveyed in this blog) was that the Google spokespeople were marvellously ‘un-techie,’ placing all emphasis on the possibilities that the solutions inspire. If there was one theme to emerge from the first two speakers of the morning, it was Exploration with a capital E; a theme that continued with Graham Hughes – the first man to visit every country in the world without getting on a plane. Anticipating this journey would take a year to eighteen months, it was four years later that he accomplished this feat. A road well-travelled I say.

The range of speakers that followed was fantastic. Artist Alexa Meade talked us through painting on the human form while later in the morning we heard about the designer’s struggle against poor ergonomically designed ticket machines in San Francisco. Everybody who spoke had something truly interesting to say but what I found most inspiring was the human connection. Almost everybody had a friend or a father or a sister who had inspired them – something I found particularly poignant in the digital and technology sectors that are so often stereotyped as being robotic and with little emotion.

For an event that was advertised as being ‘digital,’ my favourite thing about the conference was how human it was. Thanks Thinking Digital and see you next year!